Are Reductions in WHO Drinking Risk Levels a Valid Treatment Target for Alcohol Use Disorders in Teens with ADHD?

Alcohol use during adolescence is common and represents a major public health concern, yet fewer than 10% of U.S. teens aged 12-17 who would benefit from treatment for alcohol use disorder (AUD) actually receive it. As such, there’s a growing need for expanded prevention, early intervention, and treatment efforts to target youth, especially youth who are at increased risk for substance or alcohol use disorders, such as those with co-occurring attention-deficit hyperactivity disorder (ADHD). 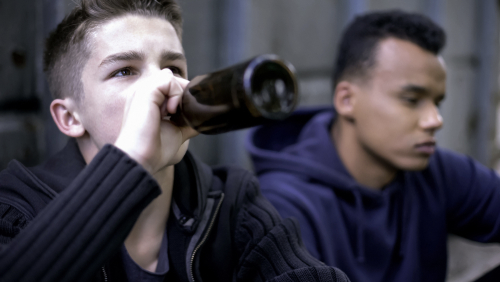 One approach that’s been gaining traction in adult AUD treatment has been to expand the focus of treatment goals to include non-abstinent reductions in drinking as a way to engage more individuals in care. World Health Organization (WHO) risk levels for alcohol consumption are based on patient self-report of the number of standard drinks consumed daily and range from abstinent (0) to “very high risk” (4). Reductions in WHO risk levels have been established as a valid non-abstinent treatment target for AUD in adult populations – would the same be true for adolescent populations, particularly those with co-occurring ADHD?

To investigate this question, researchers used data from CTN-0028, a 16-week U.S. multisite randomized double-blind clinical trial evaluating the combination of ADHD medications (OROS-MPH) and weekly cognitive behavioral therapy in the treatment of comorbid ADHD and SUD in teens. Researchers looked at associations between reductions in WHO drinking risk level and changes in global functioning and ADHD symptoms during treatment.

Analysis found that, in the total sample (n=297), 15% of participants had a 2-level or greater reduction in WHO drinking risk level after 16 weeks of treatment, with 59% showing no change, and 24% showing an increase. Achieving at least a 2-level change during treatment was associated with greater reduction in ADHD symptoms and better functional outcomes, however youth who experienced at least a 1-level change also experienced improved functioning compared to those who did not change or increased, suggesting that even modest reductions in alcohol risk may confer benefits in youth.

Conclusions: These findings parallel the adult AUD literature and provide preliminary support for the use of 2-level reductions in WHO risk levels for alcohol use as a clinically valid non-abstinent treatment outcome for youth with ADHD and co-occurring AUD.