February 2016
Evidence-based Prevention and Treatment for Youth:
Build Up Your Teen Treatment IQ 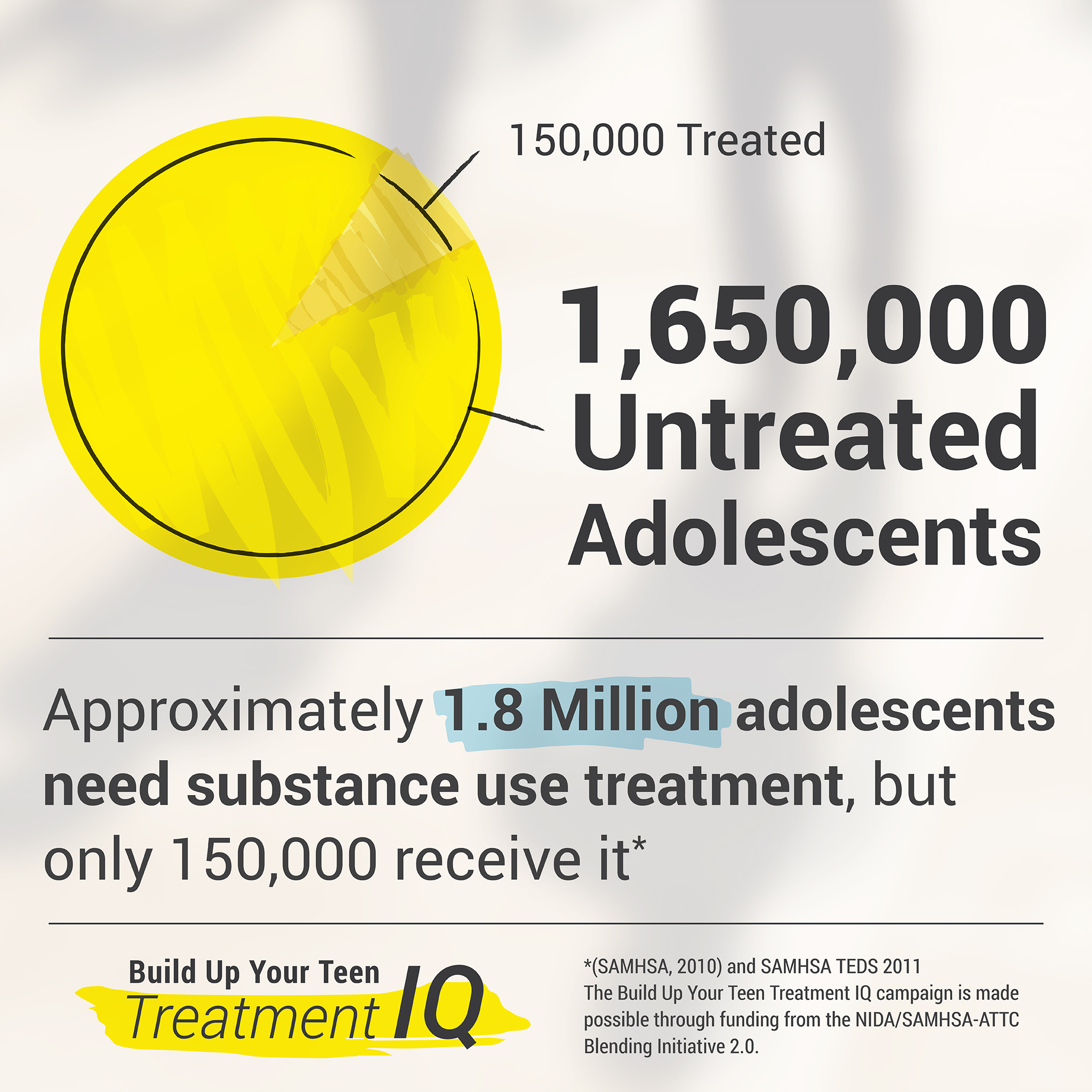 A new national campaign launched in January 2016 is bringing treatment providers the latest research on teen substance abuse and treatment.Titled Build Up Your Teen Treatment IQ: Evidence-based Prevention and Treatment for Youth (TTIQ), the campaign aims to familiarize treatment providers with research study outcomes and tools for incorporating those findings into practices for treating youth.

Based on the National Institute on Drug Abuse (NIDA) publication: Principles of Adolescent Substance Use Disorder Treatment: A Research-Based Guide, (National Institute of Drug Abuse [NIDA], 2014), the TTIQ campaign is designed to address drug abuse and the particular treatment needs of youth. Products developed for this initiative will cover the substances most abused by adolescents such as alcohol, marijuana, and tobacco, in addition to the growing concern of non-medical prescription drug use.

Tools for rapid dissemination of research to the real world

The team will develop infographics and webinars for rapid dissemination of research findings. These tools will provide treatment professionals opportunities to expand their knowledge on a range of topics, including adolescent brain development, effective behavioral therapies, treatment retention, cultural adaptions, and testing for sexually transmitted infections.

TTIQ presents the first webinar of the campaign on February 17, 2016, at 1:00pm ET:
"Substance Abuse Treatment for Racial and Ethnic Minority Adolescents: Examining the Evidence for Engagement and Cultural Adaptations.”

Data from the 2014 National Survey on Drug Use and Health (NSDUH) indicate that 1 in 9 youth age 12-17 years are current alcohol users and 1 in 16 binge drank within the past month. Marijuana use has remained fairly stable for this age group, with 1 in 14 being current users. Tobacco use has continued to decline but accounts for 1 in 20 teens being current smokers. The concern continues to grow regarding the use of non-medical prescription drugs; however, for youth age 12-17 years, non-medical prescription drug use continues to decline, with 1 in 38 reporting past month use. Males are more likely to use tobacco, have heavy alcohol use and binge drink, but females have higher rates of lifetime and past year illicit drug use. In addition, youth with a major depressive disorder and who use alcohol or drugs are more likely to use marijuana, nonmedical prescription drugs, inhalants, and hallucinogens. (Center for Behavioral Statistics and Quality, 2015).

Risk and protective factors for teen substance use

Some youth have an inherited genetic vulnerability to addiction, which may place them at greater risk for substance use and mental health disorder (NIDA, 2014). For example, youth with a past family history of substance abuse or mental health disorder are at greater risk for these vulnerabilities (Gullo & Dawe, 2015; Herman-Stahl et al., 2008; Luyckx et al., 2011). A combination of genetically inherited personality traits and poor parenting practices also increases the risk for substance use (Hicks et al., 2013). The brain is still developing into the mid-20’s, with the judgment and decision-making part of the brain developing last, resulting in youth being more apt to engage in impulsivity and risk-taking behavior. To assist youth during this developmental stage, treatment centers could provide opportunities for exciting activities in safe settings or utilize cognitive behavioral therapies such as developing drug refusal skills (Casey & Jones, 2010; Gullo & Dawe, 2015).

Of the 1.8 million youth that need substance use treatment, only 150,000 receive these services, which is about 7-8 percent (Substance Abuse and Mental Health Services Administration (SAMHSA), 2010). Retaining and engaging youth in treatment significantly decreases substance use (Burrow-Sanchez & Wrona, 2012) and has been found to reduce conduct problems and social delinquency as well as inadequacy and immaturity (Szapocznik et al., 1986). Treatment providers need to be proactive in engaging and retaining youth by accounting for cultural differences, especially for ethnic minorities, which increases satisfaction of treatment and reduces recidivism (Burrow-Sanchez et al., 2011; Lau, 2006).

For more information, visit the Build Up Your Teen Treatment IQ website.