A Roadmap to a Better Alcohol Environment

The comprehensive approach reflected in the APHA policy focuses on 13 policy recommendations. Several support enforcements of current laws on selling alcohol to underage youth, others are more controversial, such as reducing the per se BAC level for drunk driving to .05% and increasing alcohol taxes. Each state or each municipality must explore how to implement these policies, but we must act. Use the APHA policy to build the political willpower we need to improve the alcohol environment using these evidence-based policies.

To keep those policies in the forefront of our discussions, the Wisconsin Alcohol Policy Project created an infographic listing all 13 policies with brief explanations on the reverse. Download a PDF for your use and read the policy in full on the APHA website.

These are 13 effective policies that reduce underage and binge drinking, help control law enforcement costs and improve the alcohol environment at the state or local level. It will take local elected leaders, public health agencies, law enforcement and civil society working together to bring these recommendations to life. Given the scope and expense of alcohol misuse in the United States, it may be the most important battle we undertake. 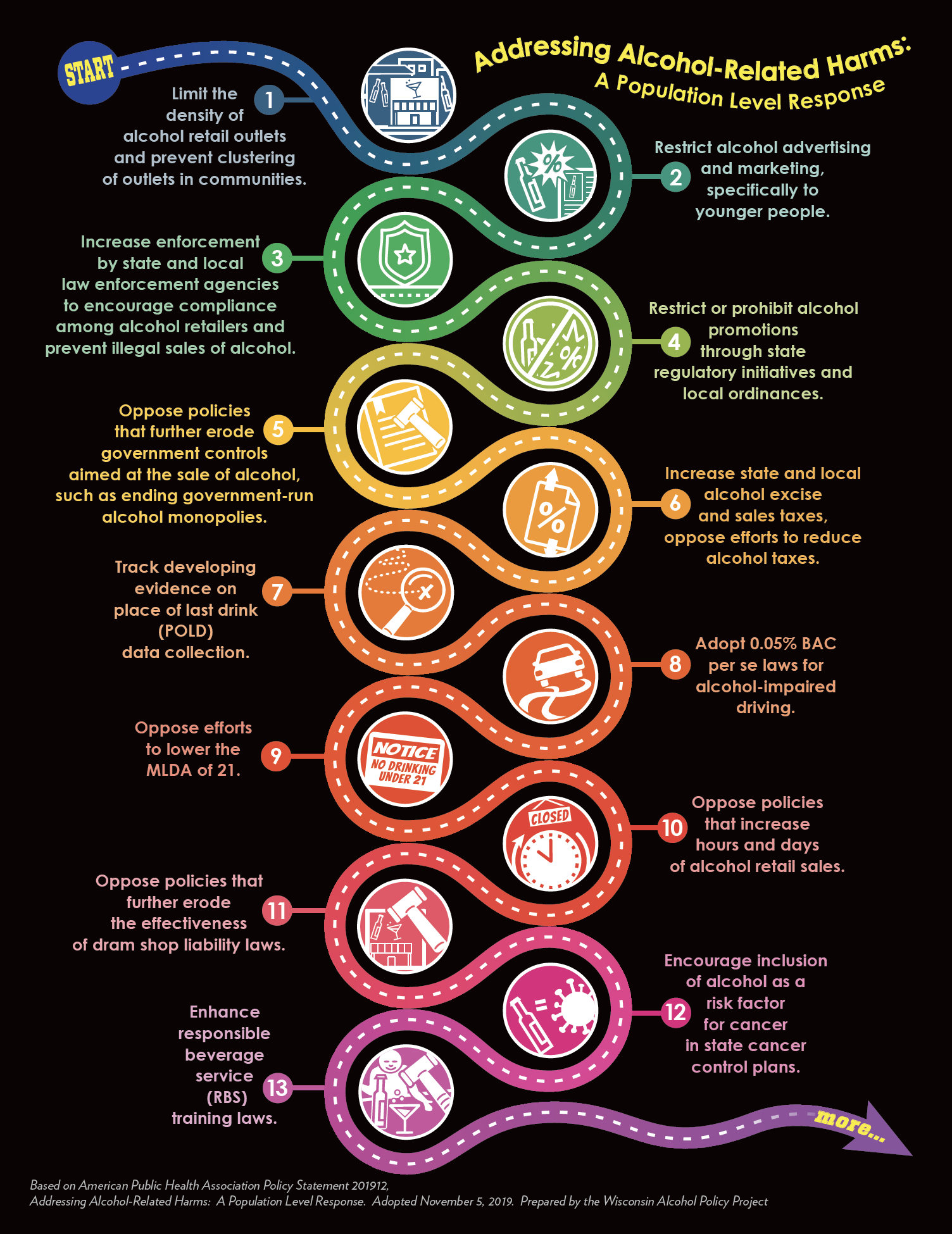 1. Limit the density of alcohol retail outlets and prevent clustering of outlets in communities.

Many communities unintentionally created harmful clusters of alcohol outlets before the full range of consequences were known. Some Wisconsin municipalities adopt narrow guidelines that keep community goals in the forefront of deliberations while limiting the number of outlets.

Local ordinances can ban promotions that encourage excessive drinking such as flat rate or “all you can drink” events. These could be very useful in campus communities where semester, sports or event-based specials often lead to binge drinking. 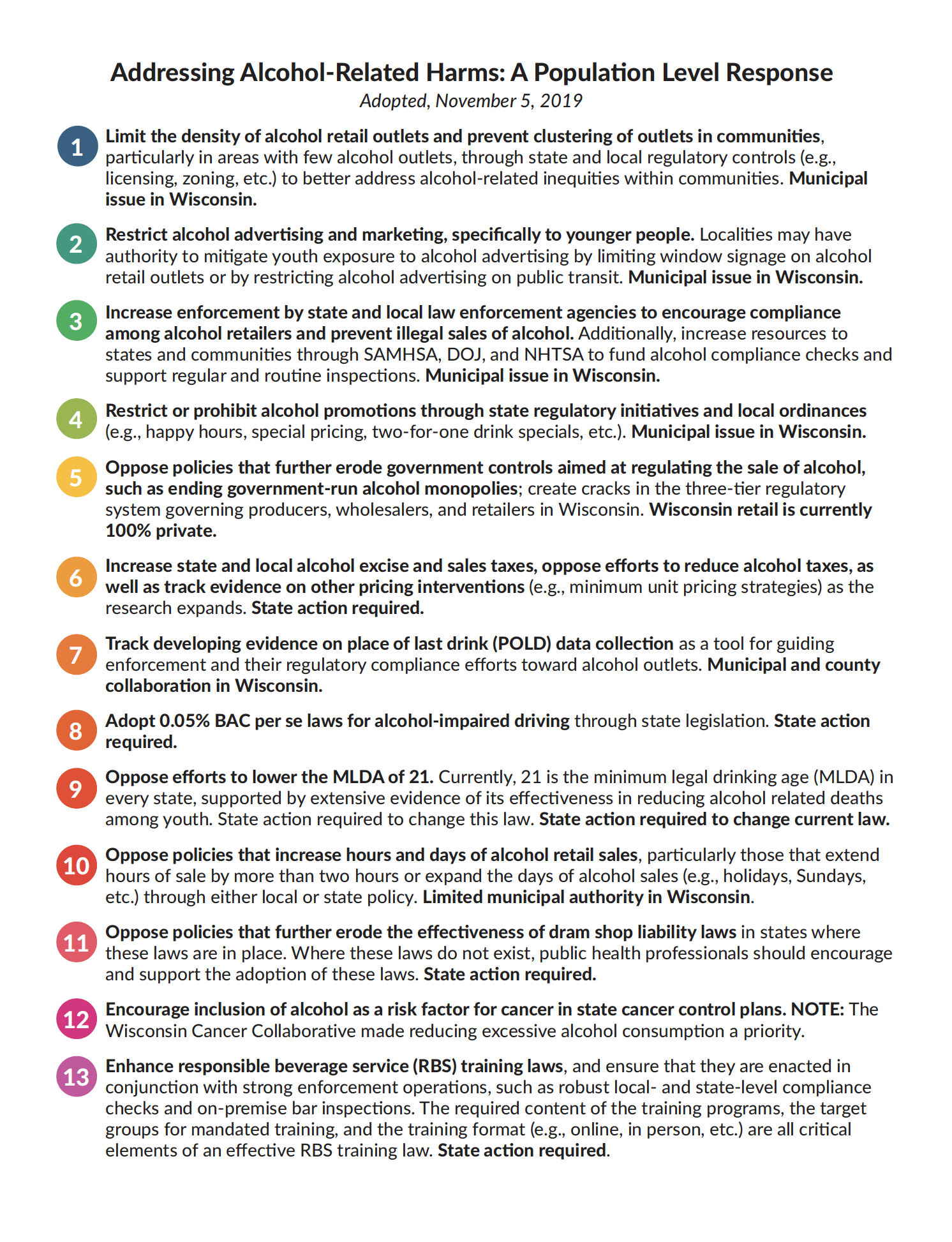 More than 25 municipalities in the Twin Cities area are compiling Place of Last Drink data on all arrests and incidents. POLD data collection allows law enforcement to focus their efforts on licensees who display a pattern of illegal over-serving that results in alcohol-related crime and disorder.

Alcohol tax increases are indisputably the single most effective way to reduce underage and binge drinking, as well as providing additional state revenue that are paid in direct relationship to the amount of alcohol an individual consumes.

In 2013, the NTSB recommended lowering the per se BAC for drunk driving to .05. Utah lowered its per se level to .05 last year and the Hawaiian legislature is currently considering a similar proposal. Several other countries, including France and Australia, currently have a .05 blood alcohol per se rate.

8. Oppose policies that further erode government controls to regulate the sale of alcohol.

Prevention and public health professionals both need to consider the agencies and programs that identify and control alcohol licensing, advertising and pricing, and work to support those existing controls.

The 21 minimum legal drinking age has literally saved thousands of young lives. According to the World Health Organization’s Global Health Observatory, 12 other nations have also adopted the 21 MLDA.[i]

While adding an hour or two to the sales days may seem innocuous, increases in the availability of alcohol can increase community consumption over time. Studies have found that increasing hours of sale by two hours or more increases vehicle crashes, emergency room admissions and alcohol-related injuries.[ii]

While only six states impose liability on locations that sell or serve alcohol, 21 states have major limitations on commercial liability. The CDC found that states with dram shop liability had significantly fewer alcohol-related motor vehicle deaths.[iii]

Beginning next year in California, all alcohol server and their manager must have a valid RBS certification from an ABC accredited RBS training provider and pass an online ABC administered RBS exam within 60 calendar days from the first date of employment.

13. Encourage inclusion of alcohol as a risk factor for cancer in state cancer control plans.

Nationally, less than one-fourth of the Cancer Control Plans have a measurable objective to reduce excessive or underage drinking. Knowing the link between alcohol and cancer supports better personal decisions and an awareness of the full scope of alcohol-related medical costs.