Wisconsin Voices for Recovery celebrated National Recovery Month with its sixth annual Rally for Recovery on the steps of the Wisconsin State Capitol on Saturday, September 14, 2019.

Ryan Hampton: Together We Are Stronger

The theme for SAMHSA’s National Recovery Month 2019,“Join the Voices for Recovery: Together We Are Stronger,” has particular relevance for Ryan Hampton, founder of the Voices project and author of the book, American Fix—Inside the Opioid Addiction Crisis and How to End It.

“When I first got sober, I had no idea that 23 million Americans are living in long-term recovery,” says Hampton. “We are one of the largest constituencies out there. When I got involved with advocacy, I realized that the more we work together, the more we could accomplish. We are stronger together. The recovery month theme makes a lot of sense—we need to work together because there is so much we can accomplish.”

“Social media has become a medium for distributing content and issuing relevant calls to action in real time. It’s also a very relevant place for storytelling. Traditional media has long ignored stories of recovery. Through social media, we were able to reach 4 million people. Behind each “like” is a real person with a real heart. Through our social media, we saw our social presence grow. We began to see solutions follow, such as legislation like H.R.6: Support for Patients and Communities Act to combat the opioid crisis. The new age of recovery advocacy is boots on the ground combined with social media.”

Another project that Hampton has launched is Recovery Voices Vote. This project aims to register 1 million people in recovery, their family members, and people who are affected by addiction, and to get them to vote.

Hampton’s key message to anyone seeking recovery is “Don’t be afraid to ask for help. Don’t be afraid to have that difficult conversation with your family, a friend, or your employer. I was afraid for years and almost died because of it. The hardest thing to do is to make that call for help. But don’t be afraid—reach out.”

Find out more about Ryan at ryanhampton.org

Lee Turner moved from Milwaukee to Nashville in 1996, with a dream of playing for a country music artist. Two weeks later, he was on tour working as a road musician. For the past decade, he’s been playing keyboards and guitar with Darius Rucker, country music star and vocalist for the band Hootie & The Blowfish.

Turner says that over time, the on-the-road lifestyle translated into behaviors that affected his home life. “This led to a downward spiral where I realized I needed help,” says Turner. “When I was ready, I went to treatment at the Betty Ford Center in California.” His employer (Rucker) told him to take all the time he needed.

“Having full support from my employer was a big help,” he says.

When he left treatment, Turner had an emergency plan in place to help him maintain recovery. He knew that it could be a challenge to return to the country music environment that tends to glorify alcohol use.

“I had a plan for who to call if I felt at risk in any situation, along with what steps I would take to stay sober,” says Turner. “It worked, and it’s still working—I have been sober for almost seven years now, thanks to the wonderful support I have on the road and at home.” 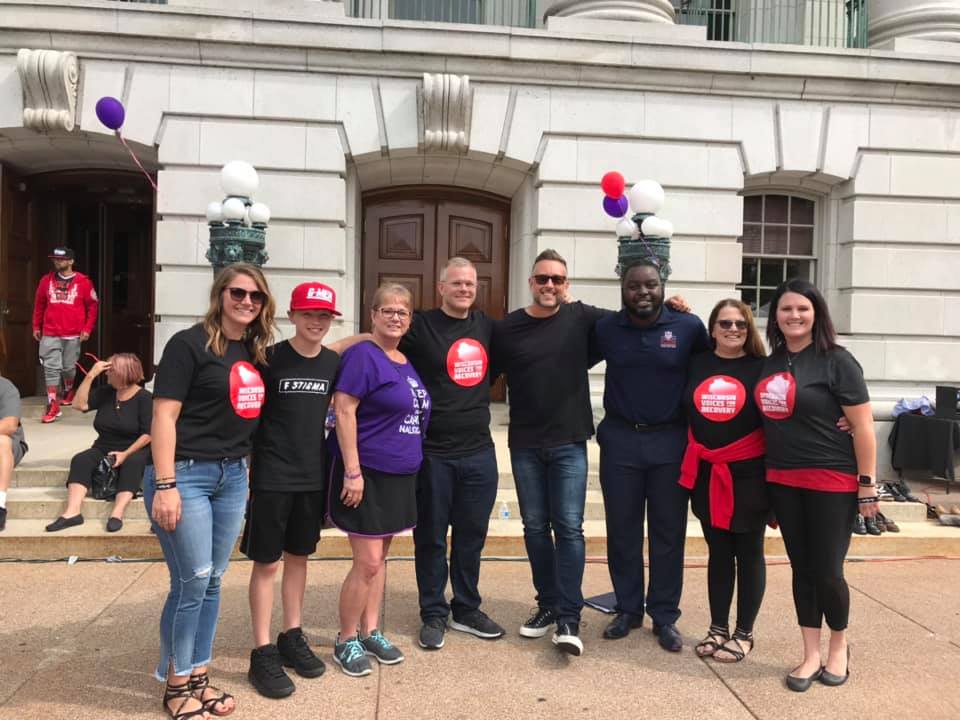 Being willing to seek help was also a big step in Montee Ball’s pathway to recovery. The former NFL and Badger football running back says, “Accepting the fact that I needed help and actually going through with it was key.”

“I also began to understand that I had a problem with alcohol and to recognize what alcohol had taken away from me, including relationships and the game of football.

“I am staying close to my family and continuously work on building a community of people who want to remain sober,” says Ball.

“Madison was just named the best college football town in America, and Wisconsin leads the nation in problem drinking,” says Ball. but that doesn’t mean that we can’t also become the top state in recovery.”

By speaking at the Wisconsin Voices for Recovery Rally for Recovery, Ball hopes to share his story on how he overcame his struggles.

“People might think that they can’t relate to someone who played in the NFL or the Superbowl,” says Ball. “But substance use and mental health issues affect us all.”