By Greg Grisolano, for the ATTC Network.

Opioid overdose deaths among older Americans are roughly 11 times greater in 2019 than in 1999, according to new research published in JAMA Network Open on January 11.

"These results suggest a need for increased screening for substance use disorder among older adults along with outreach and treatment models adapted to their unique circumstances." 1 according to the study’s researchers at Northwestern University. 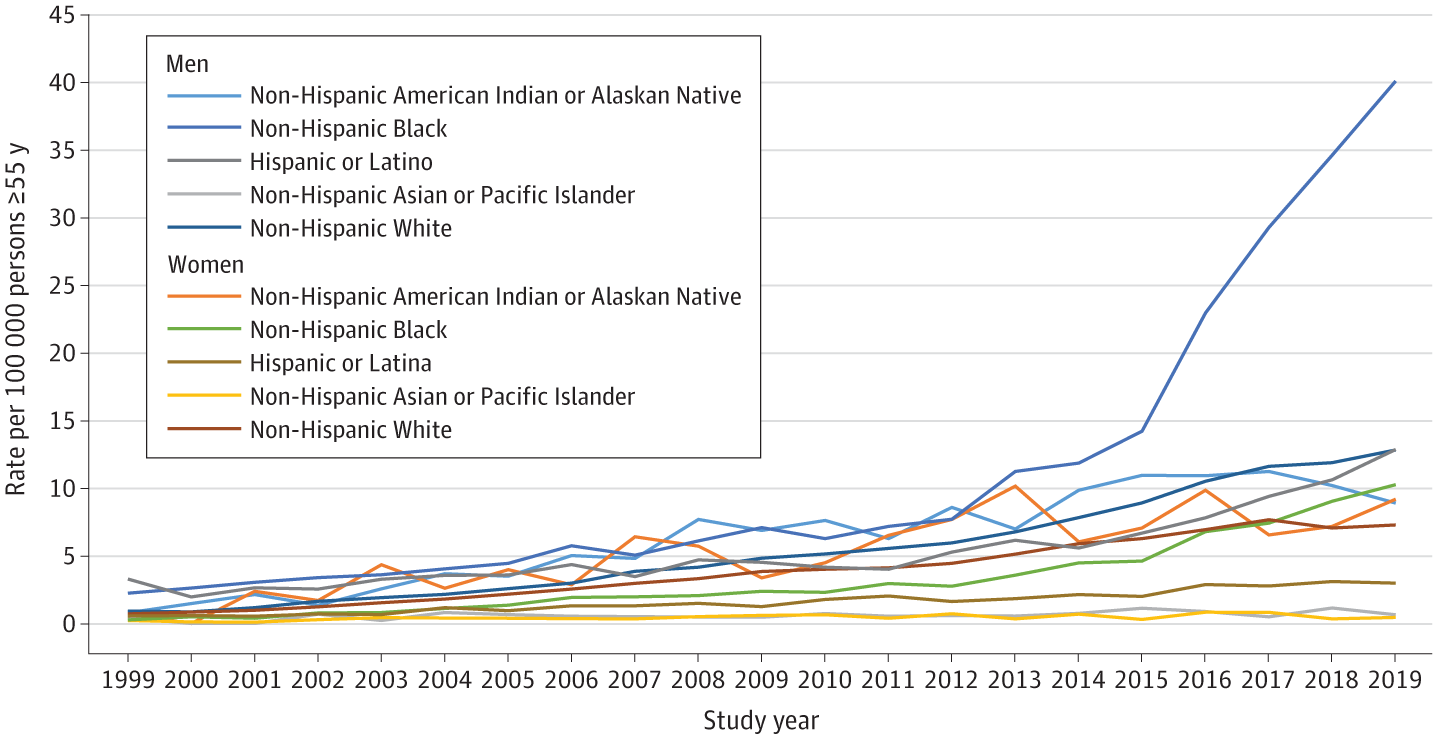 The study aimed to analyze rate variation over time among opioid overdose deaths in older adults by sex as well as by race and ethnicity. While the rate of opioid overdose is increasing among older Americans overall, Black men were found to have died at a rate of 40.03 per 100,000 population, four times greater than the overall opioid overdose fatality rate.

The authors of the study note that America’s opioid crisis continues to evolve in terms of population segments most severely affected. Emergency department visits for opioid misuse increased 220% from 2006 to 2014 for persons 65 years and older, per the study.

Racial and ethnic group disparities in rates of opioid drug overdose deaths have fluctuated between 1999 and 2019. As the epidemic escalated, rates for non-Hispanic White adults rose exponentially compared with other groups, driving up the overall death rate. However, from 2017 to 2019 (the latest year data are available), the gap between non-Hispanic Black and non-Hispanic White adults has narrowed as rates rose for the former and declined for the latter.

Hispanic or Latina women and non-Hispanic Asian or Pacific Islander men and women had the lowest rates of overdose death among this age group. They did not experience substantial increases in rates over time, and never exceeded three deaths per 100,000 persons.

The sharp increase in overdose deaths of Black men begins in 2013, a date which the study notes coincide with the Centers for Disease Control and Prevention’s “third wave” in the opioid epidemic, characterized by the increased presence of fentanyl, a powerful synthetic opioid, in the drug supply.

The study notes that it is unclear why other older adult subgroups did not experience concomitant increases in opioid overdose rates. The authors speculate the differences could be related to differences in the characteristics of the drug supply accessed by subgroups and/or whether substances contributing to the overdose were illicit or prescription. The authors suggest further investigation is needed to elucidate the reasons behind these disparities.

“Both racism and ageism may be associated with these disparities. In terms of racism, many potential factors could contribute to higher fatality rates among the non-Hispanic Black population in general and among men in particular.” 1

These factors include the consequences of structural racism, such as disparate access to SUD treatment; bias in pain treatment; residential concentration in low-resource communities with limited access to good schools, health care, and healthy foods; medical mistrust; and racially biased drug policies.

The U.S. Preventive Services Task Force recommends screening adults of all ages for unhealthy alcohol and drug use. However, screening for substance misuse among older adults is often lacking. The study speculates that several factors may contribute to this lack of screening, but ageism reflects “widely held beliefs among clinicians and the public that older adults do not develop or experience SUD.”

The study calls for expanded training for health care workers as well as other elder support service professionals who supply meal home delivery and transportation services. In addition, training in recognition of the signs of SUD in older adults, referral to SUD screening, and implementation of SUD screening as recommended by the U.S. Preventive Services Task Force are needed.

The study also recommends treatment for SUD consider issues unique to older adults, and more specifically among older non-Hispanic Black men with SUD. For example, it has been reported that older adults are less comfortable attending group therapy than younger adul

“Specific to non-Hispanic Black men, issues of mistrust and experiences of racism will need to inform treatment models. This may require use of credible messengers (e.g., those with similar lived experience) to achieve outreach and treatment goals.” 1

You can find links to ATTC resources aimed at building health equity and inclusion, as well as links to the Opioid Response Network in this issue of Messenger.